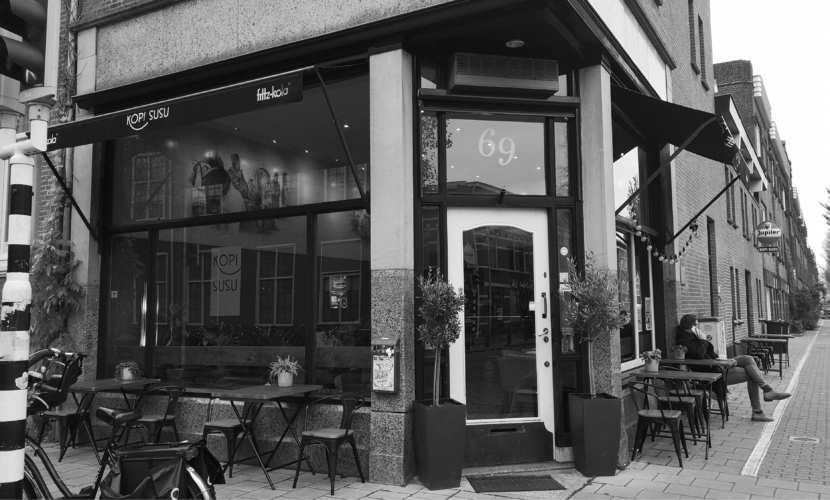 Like I explained in my last post, I will be performing my solo ‘La Cueca Sola’ at Cafe Theater Festival. This is a festival that takes place in Utrecht once a year in the beginning of March. For four straight days, cafés throughout Utrecht become a setting for short performances created by various creatives in the theater circuit. The festivals organization, finds each artist a suiting place to perform their work. Two week ago, I received an email were I was assigned my place. The cafe where I will perform my solo, is called Kopi Susu and is situated in an district called Lombok.

This neighborhood has been build between 1886 en 1920, and is one of the oldest neighborhoods outside of the famous canals of Utrecht. At this time, nationalism was rampant, and the Netherlands revered its colonial past. You will find this in the street names when you walk around in Lombok. This area used to be a typical working-class district and has a rich history given the industries established at the time. It is characterized by the narrow streets and the small, but very atmospheric, houses near city centre. A vivid and diverse neighborhood, where many different cultures meet each other.

The cafe Kopi Susu, once belonged to a well-known grocer known as De Gruyter (from which you can still find old hand-painted tiles on the wall, hinting to the Dutch colonial times). After the grocer closed its doors, the building was transformed into a shoe store which lasted till 2000. After this a group of local residents and foundation Oud Lombok, initiated Museum Cafe Lombok. Their mission was to create visibility for the history of Lombok and for the many cultures that met in this area. A place with the purpose to stimulate encounters between its local residents.

In 2009, Kopi Susu opened their doors. It’s name is translated from Indonesian and means coffee with milk. But it is also means ‘of mixed decent’. It is a meeting place for residents of Lombok and the surrounding area. The cafe is committed to create a place that is welcoming to everyone in society. It contributes in the participation of vulnerable citizens in society, helping to build a bridge to the labor market.

The cafe is situated on a corner. I am looking outside through the big glass windows, which naturally lights up the cafe. Sitting here, speaking to its owner Yakup and getting to know it’s history, feels good. It is a confirmation that this is the right place to perform my solo. Fantasizing about how I will tell my story here in a couple of months during the Festival. It’s small space brings us close together, reducing the possibility of escaping of what is being shared. Skin to skin, and you can’t help but listen and watch what is coming your way.

I hope to welcome you on the 3rd, 4th, 5th of 6th of March in Kopi Susu when I will perform my solo ‘La Cueca Sola’.

see some snippets of my movement research by clicking here